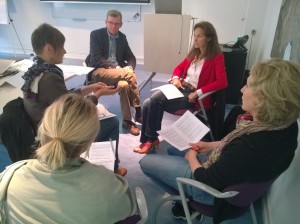 The 1th Meeting of the European Network of Visual Literacy was held from 04th to 05th March 2014 in a constructive atmosphere at the Bavarian State Institute for School Quality and Educational Research in Munich. The project to create a Common European Framework in visual literacy, is promoted over a period of two years from January 2014 as part of a Comenius project (Lifelong Learning Programme of the European Union). Therefore the overall plan of the project was discussed at the beginning of the meeting to coordinate the research and project objectives of all the eleven Comenius project partners.

Anja Morawietz Dalla Torre discussed the description of a competence development model. She pointed to a lack of empirical foundations. Julia Kittelmann spoke about the complexity, systematics and foundation of the Common European Framework of Reference for Languages​​. Together with the conference participants Claudia Birkner and Katrin Zapp discussed, to what extent the concept of competence of Weinert is sustainable for the visual field or whether it needs to be extended. Carl-Peter Buschkühle gave a presentation on the contribution of the subject of art to education, Folkert Haanstra spoke about the relationship between formal and non-formal / informal learning and Vera Uhl-Skrivanova / Franz Billmayer talked about the question “What is European about our work?”. Constanze Kirchner explained the origin and the first draft of the competence structure model, which was supplemented and advised in subgroups. Ernst Wagner reflected on the difficulties of a competence-stage model and its relation to a development model, while Marc Fritzsche presented his (trilingual) concept glossary using the example of “Imagination”.